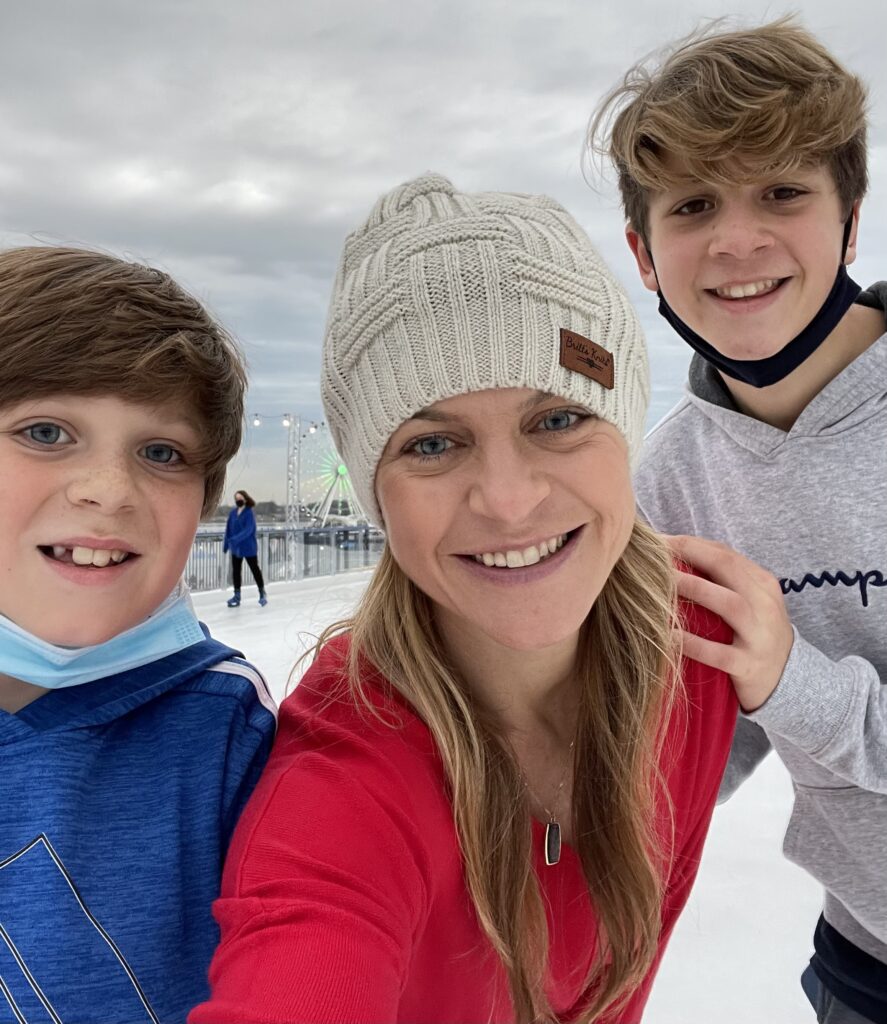 It seems like yesterday I was running after two babies and lugging around car seats and now, suddenly, both my boys are in the double digits. Brooks turned 13 on January 19, and Case turned 10 on January 20. I haven’t been on this blog much lately. I’ve been really busy with other projects, such as writing a novel, promoting my children’s book, working at a newspaper full-time and doing freelance marketing work for the Perkins Builder Brothers. Nonetheless, this blog turns 10 this year, and it will always be very special to me. If I only post one blog a year, it will be the boys’ birthday post. One day, I want them to read these posts to remember the highlights of each year around the sun. 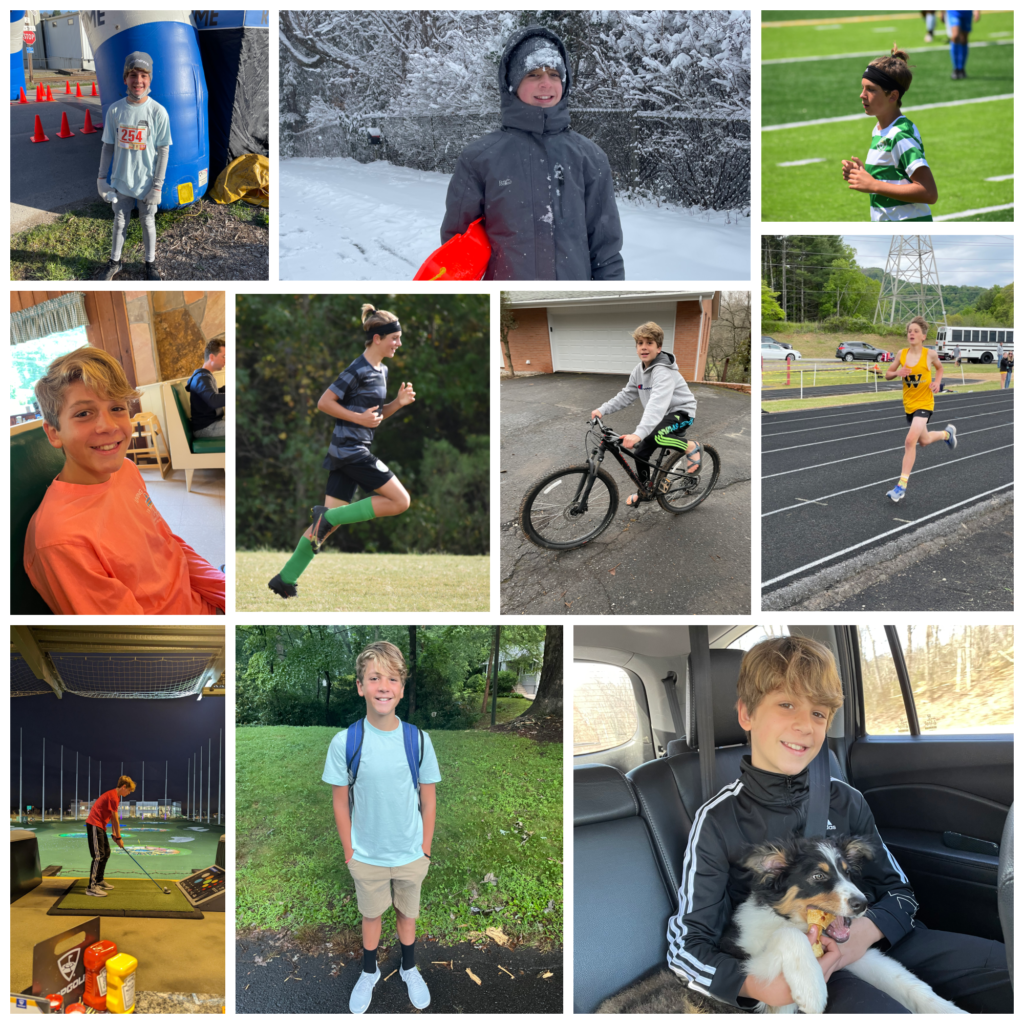 I thought Brooks grew a lot last year, but this year has been insane in terms of his development. He’s truly growing into a young man and is no longer a little boy. His voice is deepening, he’s as tall as I am, and he wears a size 9.5 men’s shoe. While it’s been hard for this mama to see him grow up so fast, it’s also been really fun to watch.

Brooks has had a really great year. He finished up sixth grade and started seventh grade. He ran track on his middle school track and field team. His main events were the 800 m, 400 m and 110 m hurdles. He loves all three events and plans to be back on the track this spring. He also grew as a soccer player and was a defensive leader on his school and club teams. During the winter season, he hit the slopes and has improved significantly on the snowboard. In fact, this year we’ve been dropping him and his buddies off at our local ski resort for them to enjoy a day on their own.

One downfall of the year was that he broke another bone. This time is was a small bone below the elbow and it happened while playing ultimate frisbee in PE. Hopefully, now that his insane growth spurt has slowed, no more broken bones!

He got a phone one year ago, so that was a big change for him and me. He loves to play Fantasy Football and Fantasy Basketball, as well as track the stock market. A very cool experience he had in the summer was Wilderness Trail. It’s a program through the Methodist church where kids and teens backpack in the wilderness for a week with no modern amenities. He absolutely loved it and is already signed up to go again this summer. He also loves watching sports and is well-versed in who plays for what team and their stats. He’s also gotten into collecting football cards this year. Other activities include mountain biking, backpacking, futsal, golfing, reading, swimming and creating elaborate cities on the PS4 game Cities: Skylines. He makes excellent grades and enjoys school.

Brooks continues to be an old soul and wise beyond his years. His interests are wide and varied. We can talk about deep topics like climate change, politics and stocks. Not many 13-year olds enjoy talking about things like that, but he not only enjoys it, he knows so much, he teaches me. I’m so proud of the young man he’s becoming and can’t see what the coming year has in store for him. 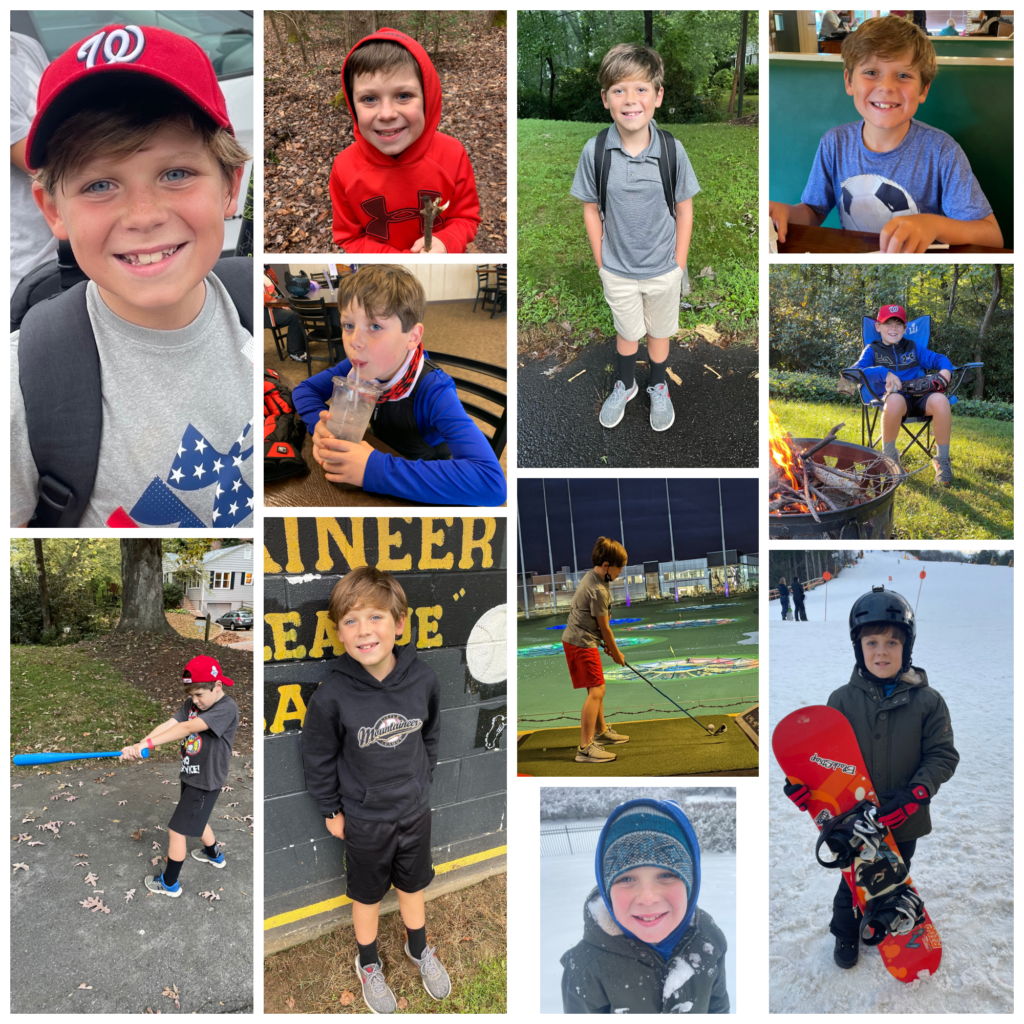 In Case’s birthday card this year, I told him that no matter how old he gets, he will always be my blue-eyed baby boy. Case continues to be silly, funny and creative. He loves to play and be imaginative. His teachers always tell me how kind he his and that he’s the kid they can put with any student or group in the class because he gets along with everyone. That always makes me proud to hear.

Although Case still loves his Nintendo, Minecraft and playing on other electronics, he’s become much more interested in sports this year, including baseball, basketball and snowboarding. He has natural skill and agility, but he had to finally make up his mind that he wanted to get serious about these activities. He’s always been like that. It must be on his terms before he will truly give it his all.

He’s especially become interested in baseball. He played fall Little League this year and improved tremendously throughout the season. He loves to hit and play infield. He does not want to pitch, although he considered it briefly. From Santa Claus, he asked for hitting nets at both our house and his dad’s house so he can practice hitting. Santa kindly obliged. Case is already getting excited about spring Little League. His two best friends also play so that makes it even more fun. He’s also been playing Rec League basketball and is enjoying that. He says basketball is less stressful than baseball, but he still likes baseball better. Speaking of baseball, he watched the entire World Series cheering on the Braves and has become interested in collecting baseball cards.

He’s participating in an after school snowboarding school this year and has already improved. I tried to teach him last year, but things are going better this season with an actual instructor helping him. I look forward to when he feels comfortable on the slopes so we can all get out there together. He also got a new mountain bike this year for his birthday, so I’m sure this year he’ll be on the trails a lot with his friends and siblings.

My little Case is the sweetest. He worries about other people’s feelings and can be very sensitive. He picks up on people’s moods and cues and wants to make sure the people in his life are okay. He can be a homebody but can also be very social. I know I only have a couple more years before he grows as tall as Brooks so I’m trying to soak up these last few moments of childhood before I have two teens/adolescents in the house. I’m proud of Case’s hard word and kind spirit. He’s such a light to all who know him. 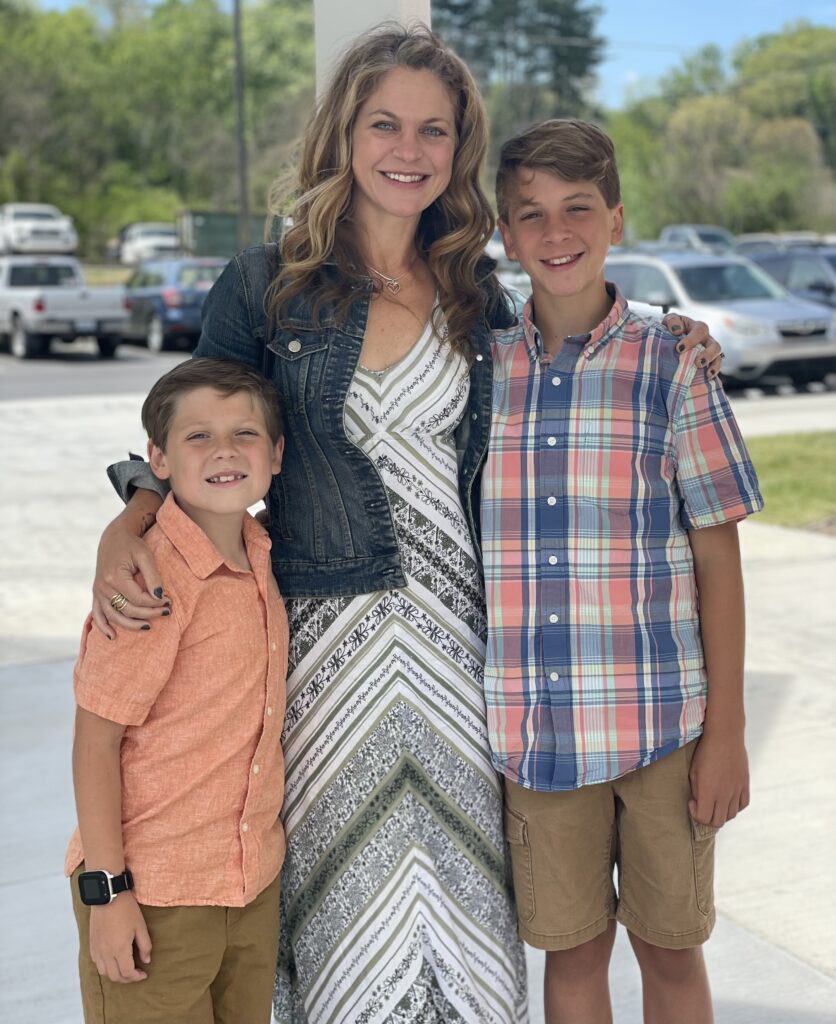 We’ve also had a lot of adventures together this year. The entire blended family went on a long weekend ski/snowboard trip to Beech Mountain in Banner Elk. Unfortunately, I broke my wrist during that trip, but I’m not going to let that get me down. I’m getting back on the slopes this year. The entire family also went on a seven-day RV trip to three amusement parks, Kings Dominion, Hershey Park and Cedar Point. I can’t even explain how epic that trip was. We had an absolute blast and are planning more RV trips for the future. We also visited my sister’s family several times in DC. We went to a Nationals Game over the summer then we also went up around Christmas and went ice skating at the Gaylord National, which is a beautiful skating rink. We’ve lived in our house a full year and have had our crazy dog, Ringo, for a full year. Now, here we are in January of 2022, ready for a fun and exciting 12 months.

I also want to tell a cardinal story. When Brooks awoke this Wednesday, on his birthday, he saw a bright red cardinal outside his window. Cardinals and hummingbirds are my mom’s favorites, so every time we see one we feel like it’s her saying hello. And then, the following day on Case’s birthday, we saw another cardinal outside our kitchen window. No doubt my mom was looking down from heaving telling her sweet boys “Happy birthday! I love you!”

Boys, I am so proud of both of you and love you so very much. More than you’ll ever know. Happy birthday, Brooks and Case. 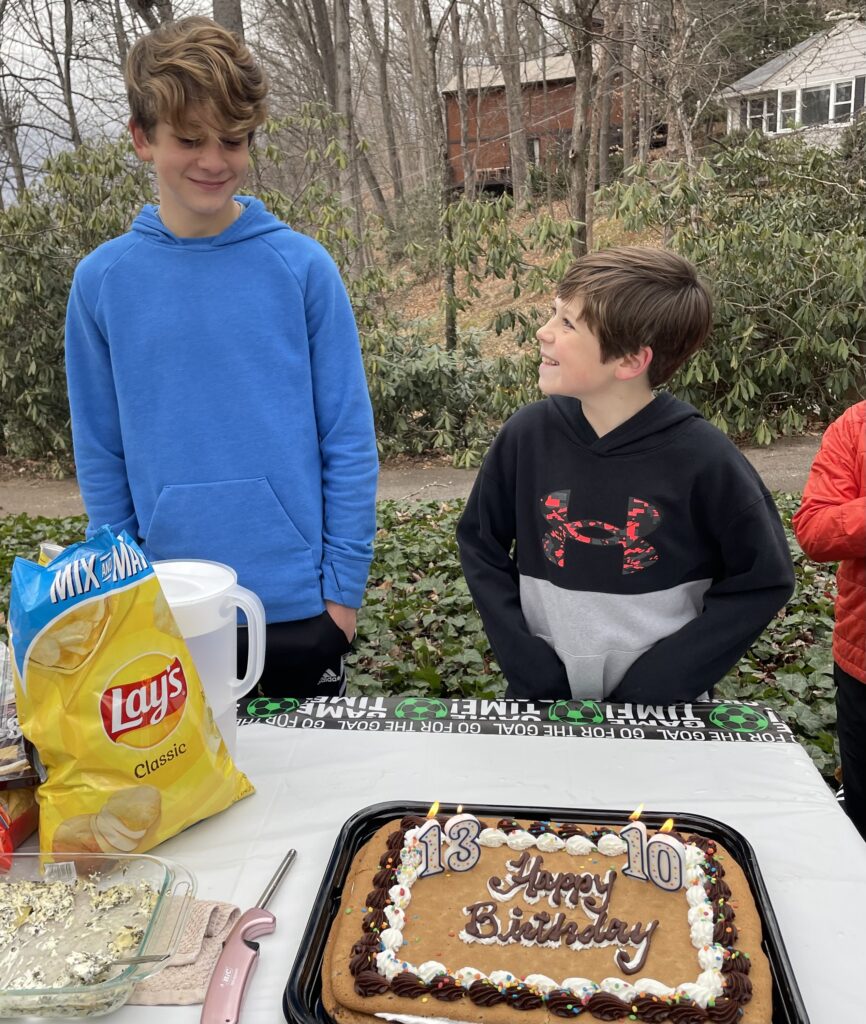