This past weekend the boys and I traveled to Raleigh to visit my best friend/college roommate. We met in seventh grade when she was the new girl in town and we attended the same slumber party. That night, we discovered we were both twelve-year old Elton John fans, and we’ve been inseparable ever since. She and I don’t see each other nearly enough, so when the opportunity came open for the boys and I to travel to our state’s capital and see her, we were all about it. Our weekend road trip was adventurous, fun and quite interesting.

The fun started in the car on the way down when I introduced the boys to Mad Libs. Do you remember Mad Libs? Those little books where you fill in a part of speech and the final result is a completely silly, random story that makes everyone giggle. I’ve also decided when I take the boys on trips just with me, I’m going to start teaching them about music I love, so the primary soundtrack this past weekend centered around one of my favorite bands, Trampled by Turtles. And another comical episode was Brooks wanting to buy an atlas at the gas station. Thsi warmed my heart because as a child, I was always the one studying the atlas when we traveled far distances. I even sent the photo to my dad and sister with the caption, ‘Like mother, like son.’ Both boys did an amazing job entertaining themselves with whatever means they had available. 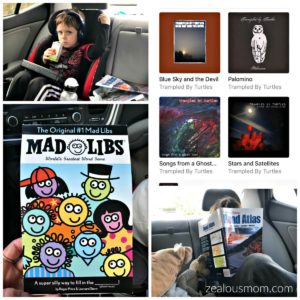 We arrived around 7:00 pm and my friend had dinner waiting on us. She’s always been a great hostess and cook. Further, we’re both quasi-vegetarians and love homemade everything, so the meal was super scrumptious. I brought a couple bottles of good red wine, so while the kiddos watched a movie, the adults enjoyed some wine and long-awaited conversations.  It was a relaxing evening, indeed.

The next morning, we were on a mission to do a number of things. The agenda included a picnic, visiting the North Carolina Museum of Natural Sciences, frolicking through the annual Lebanese Festival and eating dinner at my friends’ favorite noodle shop located directly across from NC State University, our alma mater. You’ll be happy to know we accomplished all the things.

Firstly, we visited the North Carolina Museum of Natural Sciences which was so fun. Even though I’m from the state of North Carolina and have lived here most of my life, I’ve only been to this museum and that was during a fifth grade field trip long, long ago. It’s truly an amazing museum. During a three-hour span, we saw dinosaur fossils, learned about DNA and genetics, watched drones fly, participated in a LEGO event and more. 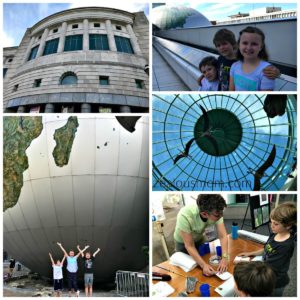 We then gallivanted around downtown and meandered through a Lebanese Festival. The kiddos all tried some Lebanese desserts and we watched belly dancers and traditional Lebanese performers. It was really interesting and I think culturally-appealing for all of us. We ate dinner near the campus of NC State University where my friend, her husband and I all went to college. Whenever I’m there, I like to take a photo of the boys in front of the famous NC Sate bell tower. It’s been a while since we’ve done so. The sun was going down and we were a bit far away, but I got the photo, nevertheless. 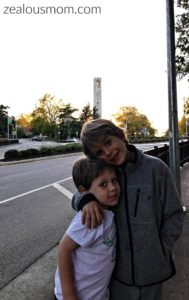 After dinner on Saturday, we just hung out at the house and spent some quality time together. The two oldest kids are only three months apart, and my friend and I will never forget being pregnant together and experiencing first-time motherhood simultaneously. Because of that, it was even more rewarding to see the kids play so well together and get along over the weekend. Below are a few more shots from our time in Raleigh, NC. 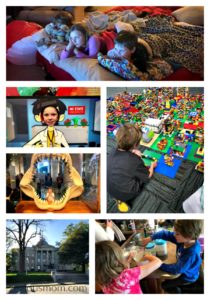 On the way home Sunday, we stopped in Winston-Salem, NC. I’m co-hosting an essential oils class there this week, so I told my partner I would check out the space and see what it’s like. What was supposed to a brief 15 minute stop at the coffee shop turned into an afternoon in Old Salem which is the most historic part of Winston-Salem, and one of the most historic sections of the state and country. The boys and I did part of a walking tour of Old Salem, visited The Historic Brookstown Inn which is in the town’s original cotton mill, ate lunch at a popular Mexican joint and finally ended up at stopping by the coffee shop which was our original reason for the visit.

This kind of the thing is the story of my life. My plan that should take 20 minutes inevitably ends up taking hours because I love adventuring and exploring. The boys don’t mind. They love it too.

And lastly, my eight-year old, Brooks, had a particularly exciting weekend. The science museum sold suckers with insects in them. This intrigued Brooks significantly, so he spent part of his money to buy a sucker with a scorpion in it and he ate most of the sucker, including the scorpion’s head. He also pulled his tooth while we were driving down the road. So yes, lots of excitement for the big boy.