I’ve learned I must dare greatly.

My life, especially over the past three years, has not been one lovely moment after another. There’s been grief, fear, darkness, uncertainty and pain. But through it all, I’ve tried to stay positive. Even in the worst moments, I’ve worked to identify what makes me grateful and happy. Nevertheless, there was a lot of sadness in my soul.

Last August, I watched a friend compete in a triathlon. And when I did, I was awestruck by the amount of people who could train and compete in such a demanding event. I remember thinking, “There is no way in hell I could ever do this.” The run segment was the only part I felt I could actually complete. But when I was there, I keenly observed. I watched folks of all body types and ages walk around in swim jammers and triathlon suits. I watched their faces as they crossed the finish line.

Once I got home and processed my experience as a spectator, I thought, “Hmmmmm…maybe I can do that.”

I went to the lap pool that next week and tried to swim. My form was terrible and I was exhausted after two laps (50 yards). A typical sprint triathlon requires approximately 750 yards of swimming.

I went back the next week. And the next and the next. It wasn’t clicking.

My friend I had watched in the August triathlon told me to swim for five minutes straight and let that be my initial goal. So, that’s all I thought about. I didn’t worry about swimming 750 yards which would take about 20 minutes. I focused on swimming for five.

I remember the day I finally swam five minutes straight without stopping. I felt elated. It was the motivation I needed to keep going. My next goal was ten minutes, then 15, then 20. I finally got to where I could swim for 20, but my form was still off, so I took adult swim lessons from a good friend of mine who’s an avid, skilled swimmer and teacher. She helped me polish my form and figure out where I was wasting energy or doing things incorrectly.

I also registered for my first triathlon around this time because I knew if I went ahead and registered, I had to keep training and I had to make it happen.

The first time I swam 1,000 yards and it felt fluid, I thought I was going to cry with joy. It took me seven months to get there, but I got there. During all this time, I was also riding the spin bike at the gym and running.

I wasn’t as worried about the bike and run. Even though I didn’t have a ton of experience with a road bike, I knew how to ride a bike. After getting comfortable with the swim, I moved on to getting off the spin bike and riding a bike on the road and continuing to train for all three components.

And now here I am. The triathlon is tomorrow. In a little over 24 hours, I’ll be standing at the lake’s shore with other triathletes waiting to start. I have so many nerves and emotions even thinking about it. But I can say one thing for sure. The journey I’ve had getting to this point has been pivotal and paramount to my life. 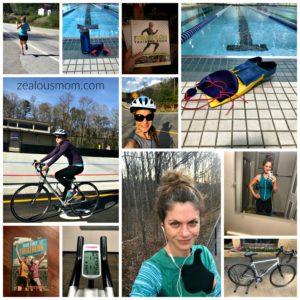 Recently I heard Brene′ Brown speak at a conference. She’s a shame researcher as well as a phenomenal writer and speaker. Through her research and her experience with people, she’s found that vulnerability and courage are not opposite ends of the spectrum. They are uniquely and forever intertwined. Courage is being vulnerable and putting your weaknesses on the line.

Courage is not staying in our “safe place” and our comfort zone or doing things to please others. Courage is completely exposing ourselves and fully knowing failure is an option.

Courage is about getting in the the arena, not about being a spectator.

Signing up and training for this triathlon has pulled out many insecurities, but I did it and am doing it anyway. I have no idea what’s going to happen tomorrow. I know I will feel significant anxiety when the race ensues and tons of people are splashing and swimming around me in a deep, vast lake.

But isn’t that what life is all about? We can’t stay in the shallow end forever.

I never in one million years thought I would compete in a triathlon. I never thought I could do it, but I’ve shown myself that I can. My training has brought many unexpected emotions and allowed me to grow in my physical abilities and connect with awesome, wonderful people.

Whatever happens, I’m determined to have fun and take it all in. I’m going to trust in my faith and my fitness and be vulnerable. I don’t care if I finish last as long as I finish. Like many experiences, training for this triathlon has shown me life is truly about the journey and not the destination.

So, here we go. The time has arrived to put on those goggles and dare greatly. 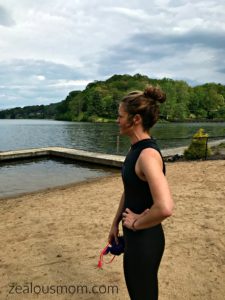