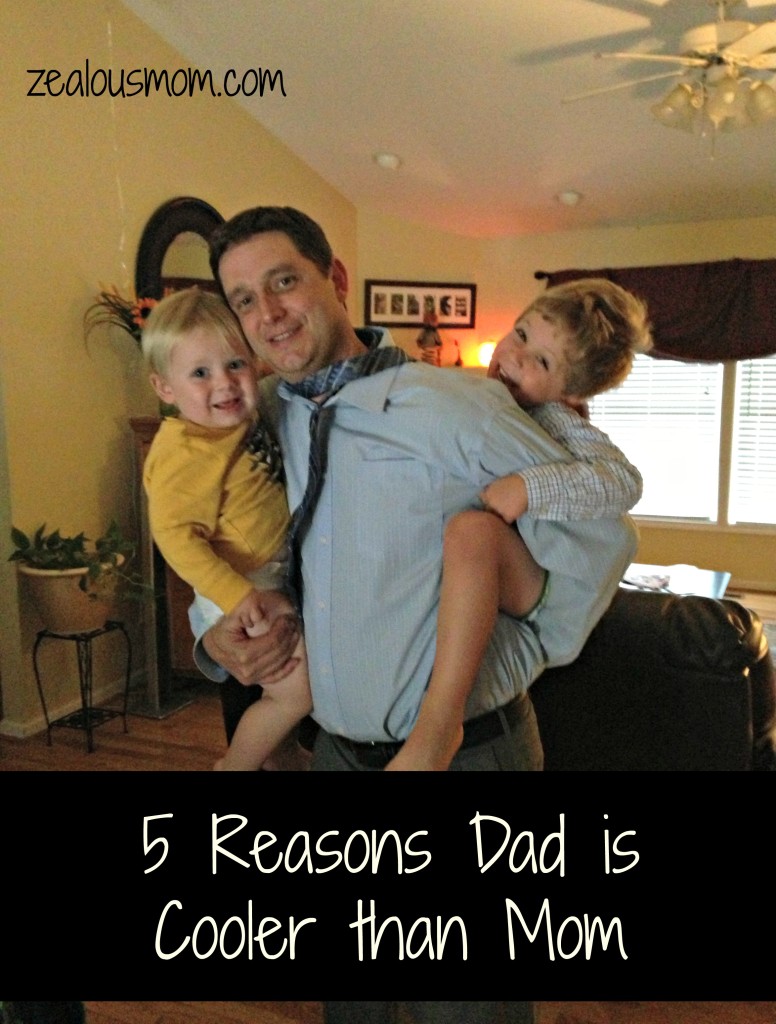 Disclaimer: This post was written based on my own experiences observing and living with dads and is no way indicative of all dads of the universe, though I have a feeling some of these traits ring true for many.

1). He has a higher creativity/silliness/wildness threshold: I’ll give myself some credit for coming up with learning games or turning a play activity into a learning game, but let’s be honest here, that doesn’t make me cool. Kids like to be silly and creative. My dad was the one who took my sister and me out just a little too far in the ocean. He was the one who dressed up in Halloween masks and jumped out behind doors to scare us. He was the one who bought a fondue set at a flea market and let us sit on the kitchen counter to use it. My husband  is the one who created an obstacle course in the driveway with cones and car wash cleaning supplies. He’s the one who lets the boys ride his back like a bucking bronco.

2). He wipes his hands on his socks: One leg is slung across the knee while the hubs is eating some Nabs or a Snickers bar and before I know it, he’s wiping his hands on his socks. Often times, there’s a napkin sitting on the table but in lieu of the item actually made for wiping hands, dads often use the socks instead. Where do guys learn this? In the locker room? Summer camp? The bus on the way to a basketball game? Who knows, but it cracks me up and grosses me out at the same time.

3). He can fix stuff: You may be one of those moms who can fix everything around the house, but that is not me. I can change a basic AA battery in a toy that requires a classic screwdriver, but other than that, I’m not too handy. When I was a little girl, I always knew my dad could fix or change the batteries in anything. If he couldn’t truly fix it, he could at least rig it enough so that it worked for a while longer. Now my husband is the one who knows where all of the batteries are and which screwdriver or other random tool is needed for toys with a strange battery pack.

4). He’s strong enough to throw the kids: I’m not sure why, but children love to be thrown in the air. From babies squealing with delight to toddlers being thrown in the pool, kids love the free fall feeling of being tossed up super high. My husband and I make large children. Both of my boys were on the hefty side from the time they were born. I was simply not strong enough to throw them, but my husband was/is, and the boys love him for it. So whether into the or into the pool, flying children abound when dad’s around.

5). When he plays, he plays: Women are natural multi-taskers. Consider the days long ago when women had to focus on five or more children while at the same time making pottery and cooking dinner over a fire. Or think about another time when women worked on farms while managing a brood of children. Traditionally, men are required to focus on one thing at a time. Whether it’s hunting, farming, working, or parenting, men are awesome at focusing on one thing. Think about it. When moms “play”, we are also trying to cook, change a diaper, breastfeed, send a text to the baby-sitter or Grandma, fold laundry, or put away dishes. But when Dad plays, he truly plays. He ignores everything else, gets down and dirty, and straight-up plays. What kid wouldn’t love that?

I hope you and all the dads in your life have a wonderful Father’s Day!